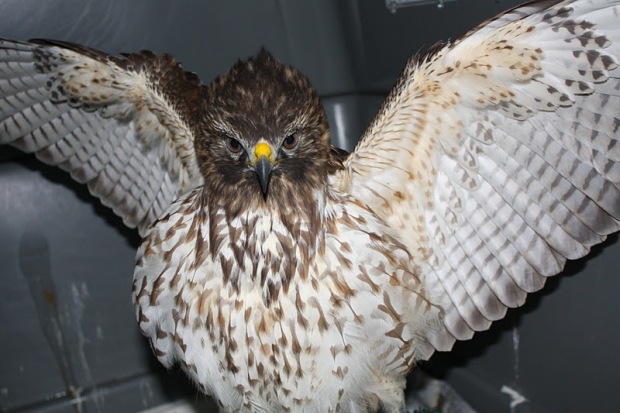 Soldier-girl puffs up, ready to strike at any hands that venture too near. Photograph by Suzanne Shoemaker.

A feisty new lady joined the ranks of Owl Moon patients this week. She is, like Squeak-toy, a juvenile red-shouldered hawk. However, “Soldier-girl,” being female, is considerably larger than Squeak-toy, a male. In raptors, unlike most bird species, females are typically larger than males*. Whereas Squeak-toy weighs in plump at 620 grams, Soldier-girl is lean at 880 grams. Both birds have similar personalities and I am curious to see how they get along when placed together in an outdoors mews, which is due to happen this weekend.

They are alike because both are brave and quick to take the offensive when approached. For example, DO NOT make the mistake of reaching into either crate to place a water dish or food down without donning heavy gloves first. Before you know what hit you, you will be cradling your hand and an angry red-shouldered hawk will be glaring at you from its perch daring you to try again. Squeak-toy, being a veteran, can get the message across with a look in his eyes alone now, but Soldier-girl puffs up and raises her wings to send the point home.

Both birds will let you know, in no uncertain terms, if/when you are offending them.  Red-shouldered hawks are known to be vocal raptors, but these two take the prize. Squeak- toy starts up with some short squeaks (hence the name) as soon as he hears someone approaching and the calls increase in duration and volume with handling. Soldier-girl, on the other hand, gives little warning, but blares with great volume once in hand. They give a repeated series of loud, long kee-aahs that can be quite alarming. It is easy to imagine how their calls might cause a predator to drop them!

As to how Soldier-girl wound up in rehab, I’ll have to fill you in on that when I get more history from my vet, Barb Stastny. For now I only know that she had a fracture in her left leg which Barb repaired with a pin. Soldier-girl recovered from surgery at Opossum Pike Vet Clinic for two weeks before being transferred to Owl Moon Raptor Center last Friday, for continued care and reconditioning.

Squeak-toy gives me the look that says "back off!" Photograph by Suzanne Shoemaker.

Squeak-toy continues to receive physical therapy and flying time, but his recovery is not going as well as I’d hoped. He has not regained enough extension in his right wing to fly well, and despite our daily routines, his progress has slowed. I’ve decided that the next step is to train him to fly to the glove. This will serve two purposes: first, it will allow me to work with him and fly him more frequently without assistance (creance flying requires two people); and second, it will make him easier to place as an education bird (both for and his handler should we find that he is not a candidate for release. In my experience as a falconer, the training will not make him less capable of surviving in the wild if Squeak-toy does recover enough to release.  Trained birds that were reared in the wild by their parents will revert back to the wild state rapidly upon release. 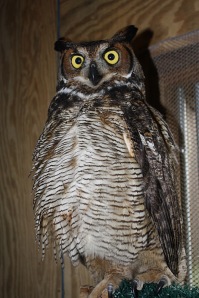 Shredder after a satisfying, if somewhat messy, dinner. Photograph by Suzanne Shoemaker.

Meanwhile good ‘ole Shredder, the great horned owl, has been outside for close to two weeks now. After the first week we attempted to fly him on a creance line to assess his flight, and begin to recondition him for possible release. What we discovered was, though his wings had the mechanics for flight, he was very reluctant to use them. A feint grinding I heard and felt when I rotated his wing through the motions of flight was cause for further anxiety. I called Dr. Barb to schedule him for a follow-up exam and x-ray.

Barb saw him the next morning. She found that the pin, which was still in the mended humerus (upper wing bone), had slid upward, and protruded enough to rub on his shoulder blade when he lifted his wing (hence the grinding sound). It had not broken the skin nor caused any damage, but it was painful and a problem. Fortunately, the pin was no longer needed so Barb removed it. Otherwise, Barb was pleased with the way the bone had healed and gave him a good prognosis for release. What a relief!

Shredder needed another round of antibiotics and another week in the mews to recuperate, but the important news is that no new harm was done to wing. Already he is more active in the mews, and I look forward to seeing him fly on a creance this weekend. Until next week!

* There are several hypotheses for why there is so-called “reverse sexual size dimorphism” in raptors. One is that the difference in size allows mates to hunt different size prey, so there is less competition and more complete use of resources on a nesting territory. It makes sense that the female would be the larger, because she needs greater reserves for developing eggs and for the long period of incubating eggs and brooding young.