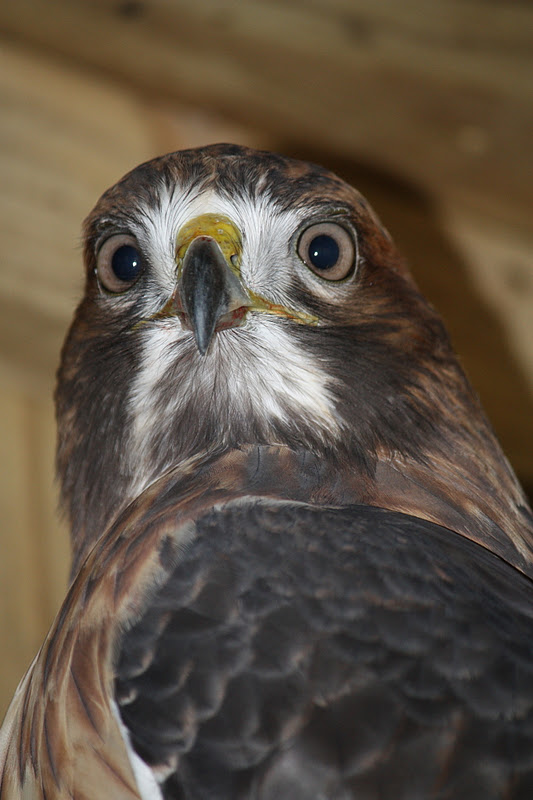 Today it is my pleasure to introduce to you a bird who is a true gentleman among raptors. In the three years he has been with Owl Moon he has served as both a host and a role model. Sir Galahad, as we have come to call him, is an adult red-tailed hawk. I think he is male, but in truth I can’t know for sure. His weight is in the range of gender overlap, being high for a male and low for a female. I call him “he” because his behavior is more like that I see in males; less aggressive and less inclined to raise those crown feathers than females. Sir Galahad left Owl Moon last Friday to begin a new life at Meadowside Nature Center in Rockville, MD.
Today, I would like to take a moment to remember our time together.

I first met Sir Galahad on March 19, 2009. Ian had been walking a footpath along the Monocacy River in Frederick, MD when he came upon a hawk on the ground. The hawk didn’t fly off when he approached. Concerned for its well-being, Ian called me.  Ian and a friend walked me back to where they had seen the bird earlier. The hawk wasn’t there, but after searching in widening circles for half an hour, I spotted him on a low branch. He didn’t budge when I reached up and grabbed both legs. So began our long “friendship.”

Sir Galahad was severely emaciated and dehydrated, so I began his treatment as soon as I got him home. There was no immediately visible wound, but there had to be a reason why he had gone hungry. I noticed a slight droop in his left wing, but I couldn’t feel a fracture. After he was re-hydrated and eating again, I brought him to Opossum Pike Vet Clinic where Dr. Barb Stastny took x-rays. No injuries were visible on the radiographs, so I kept him on cage rest for another two weeks and then moved him to an outdoor mews. Outside I noticed he could not fly to the higher perches. Rather, he worked his way up sequentially from lower perches.  After another week, we tested his flight on a creance line. We found that while he could fly on the level, he was unable to gain much altitude.

I knew there must be something I was not seeing so I took him to Tri-State Bird Rescue and Research in Newark, DE, where avian specialists took further x-rays and evaluated him. Dr. Erica Miller discovered an inflammation in his left wrist joint. She prescribed an anti-inflammatory drug and suggested I give him physical therapy along with the flight exercise. Erica said if his flight did not improve in two weeks, it probably never would. After the allotted time expired his condition remained unchanged. Sir Galahad needed a permanent home.

Since Sir Galahad is able to fly (though not well), I wanted his home to meet certain criteria for a good quality of life. I wanted his mew to be large enough for him to spread his wings and fly. Additionally, I wanted him to be trained to fly to the glove so he could exercise his wings outside of the mew. Training to the glove would make him more comfortable with people, improving his life and also make him more useful for education programs. There are typically restrictions on how long a rehabilitator can keep a bird if it cannot be returned to the wild. Fortunately, Maryland Department of Natural Resources Wildlife & Heritage Service allowed me some extra time to find such a home.

During that time, Sir Galahad hosted numerous red-tails, who out of necessity shared his home. Every newcomer was treated politely and with respect. Sir Galahad’s quiet dignity gained him the respect of his guests in return. They always behaved congenially towards each other, and with some companions I even saw mutual grooming and other signs of bonding. At times I found it emotionally difficult to separate them when it came time to release the roommate, but each time, Sir Galahad adjusted well and was just as hospitable to his next guest. 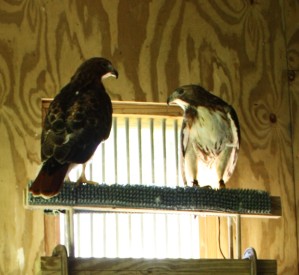 Over the three nesting seasons Sir Galahad spent at Owl Moon, he also became a foster parent to three juvenile red-tailed hawks that, for various reasons, could not be returned to their real parents. Each time, Sir Galahad came through. He treated them well and showed them how to be a red-tail. Two of the juveniles were released here at Owl Moon, and both made visits to the mews from time to time. I like to imagine they were paying a visit to their old mentor, but the handouts I left for them to help them get by while they were learning to hunt on their own probably enticed them as well.

Saying goodbye to Sir Galahad is a mixed blessing for me. I am happy to have the mew open for newcomers, but I will sorely miss seeing him every day. I am thrilled however, that Meadowside Nature Center will be his new home! Meadowside’s large mew and caring staff will provide him an excellent home. The staff is excited at the prospect of training him and providing regular exercise outside the mew. Lisa will be his handler, and I will be helping her learn the techniques of training a hawk to fly to the glove. Best of all, Meadowside is only 20 minutes from my house, so I can visit him often!

If you would like to meet Sir Galahad you can visit him at Meadowside Nature Center.  He will be used in their education programs, and when he has completed training you may even be able to see him fly to Lisa’s glove. Be sure to send us a message or a picture if you do. We would love to hear how he is doing!