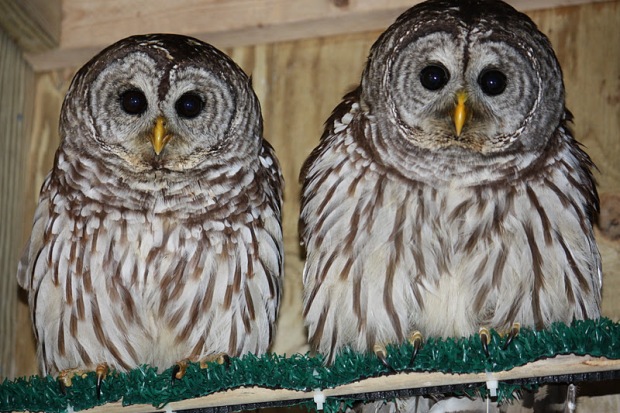 Allow me to introduce to you, “Mystery” and “Cheerio,” two female barred owls who joined us this month. Mystery’s condition is, as her name hints, a little mysterious. She was transferred to Owl Moon from Second Chance Wildlife Center on January 5th where Daniel and Patti brought her 11 days earlier after they found her “unable to move” in their yard in Monrovia, MD. Mystery was weak and lethargic, and very dehydrated upon her arrival, but otherwise she appeared in good physical shape. She was a healthy weight, even somewhat plump. The color of her mucous membranes (roof of mouth, “gums”, and underside of eyelids) was a normal pink; and no wounds, fractures, or other injuries were evident. The only remarkable aspect of her condition was a rather heavy infestation of parasites. Hippoboscid, or “flat” flies are an unpleasant external parasite that is commonly seen in raptors, though not normally in these numbers. Hippoboscid flies reside under the feathers and make their living sucking blood from the skin. Mystery also had a high number of feather lice, which feed on the feather vanes and the blood in the quills of growing feathers and can be quite an irritation.

Mystery was treated with a mild insecticide to kill the flies and lice. While ectoparasites can be a serious problem, they are not likely the reason why Mystery wound up in rehab. A healthy raptor can usually keep a parasite load in check. It is when one gets sick or injured that the parasites get the upper hand. Ectoparasites themselves would cause a slow decline, and symptoms such as anemia and weight loss, none of which Mystery had. It is possible that she had been hit by a car or suffered another trauma; perhaps a concussion, and her symptoms were no longer evident. The cause of her decline will likely remain a mystery. Second Chance treated her with the “catch-all” non-steroidal anti-inflammatory (NSAID) drug. Maybe the NSAID’s helped, or maybe she just needed some time. Whatever the reason, Mystery has since recovered nicely. She has regained her strength, is eating well, and flying in the outdoor mew and on the creance line with vigor. We want to allow Mystery more time to build strength and stamina, but I expect to be able to return her to her home in Monrovia soon.

Owl Moon’s other barred owl, “Cheerio,” (named by my 3 year-old grand-niece, Sophia) is also recovering well. Cheerio was discovered by Gary, who found her in his driveway in Petersville, MD, after returning home from working a night shift early Friday morning, January 20th. He brought her indoors and kept her in a box in a warm, quiet place until evening. I met him on his way back to work that evening and transferred her to Owl Moon Raptor Center.

Cheerio was presumably hit by a car. She had a concussion, a bad bruise on her left “forearm,” and was lethargic, dehydrated and in pain. We are treating her with the usual NSAID, and she is responding well. She is not eating on her own yet, but she is being hand fed a normal diet of mice and quail, and acting plenty feisty when we need to give her treatments. We plan to move her to the outdoor mew with Mystery in another day or two, where Mystery can remind her how to feed herself!

I have saved the best news for last! I am pleased to report that beautiful Pasadena, the red-shouldered hawk with a wing fracture, is now flying free in the town from which she took her name. Matthew and Crisdee were present, as was their son, Holden, and Crisdee’s mom and dad, Pandee and John. All were involved in Pasadena’s rescue. Crisdee was the one who had bravely captured the injured hawk, so I asked her if she would like to do the release. She was game, but Pasadena bit me as I was getting her out of the carrier, so rather than pass a biting bird to Crisdee, I ended up letting her go myself.

We released Pasadena from Matthew and Crisdee’s back deck, which has a lovely expansive view of the sky. When she took off we could watch her go for a long while. She flew high and didn’t stop until she reached a tall tree in the distance. Then she took off again and circled high, surveying her surroundings before landing on another tall tree. It was wonderful to watch. Matthew filmed the release with his phone, and you can see he did an admirable job, but Pasadena was faster than Matthew and she quickly flew out his view.