When winter storm “Riley” brought record breaking winds through our area last Friday, we crossed our fingers. Raptor nesting season is underway here in Maryland, and we hoped that the nests and babies would stay in place.

On Monday, March 5th, we received our first baby raptor call of the season. Steve McCormick, Golf Course superintendant at Columbia Country Club in Chevy Chase, had found two Great Horned Owl nestlings at the foot of a damaged white pine tree on the course.

Steve told his children about the owlets and his five-year-old son promptly named them “Taco” and “Peanut Butter” (Taco being the larger of the two). We made arrangements to meet with Steve and transfer the owlets to Owl Moon Raptor Center, where we could examine them carefully for injuries.

Taco and Peanut Butter were fine, fat, and healthy. It was clear they had received parental care despite the mishap.

We called Comprehensive Tree Care, our caring and dependable “tree guys,” to help us return the owlets to their parents. Then, we constructed a new nest for them using a laundry basket. The young owlets received several meals over the next 24 hours, and spent the night at Owl Moon.

On Tuesday, arborist Jason Beach climbed 35 feet up and secured the the nest basket in the nest tree. Then Taco and Peanut Butter were elevated up the tree in a protective bag, and placed in the nest with some dinner. Though not seen, we believe mom and dad were watching from a safe distance. Steve, along with several other enthusiastic golf course staff were also watching, and agreed to monitor the nest. Today, they observed the parents watching the nest, and confirmed that Taco and Peanut Butter are safe and active, popping their heads up to where they could be viewed. 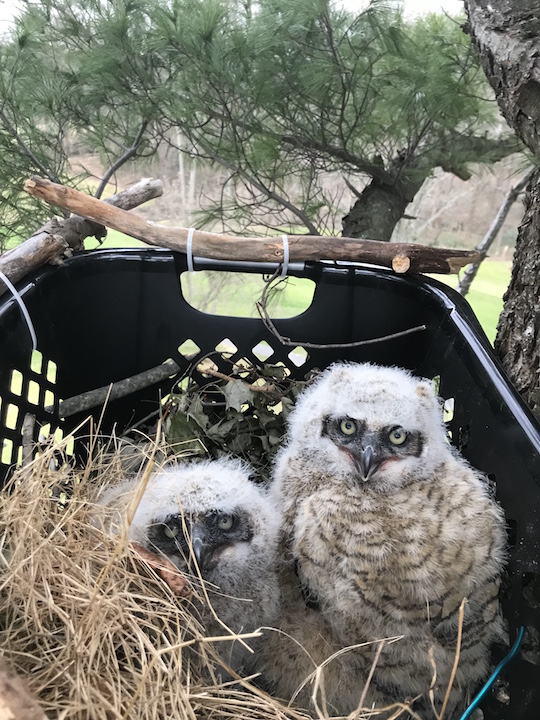 Taco and Peanut Butter in the nest basket. Photo by Jason Beach.

7 thoughts on “Taco and Peanut Butter”